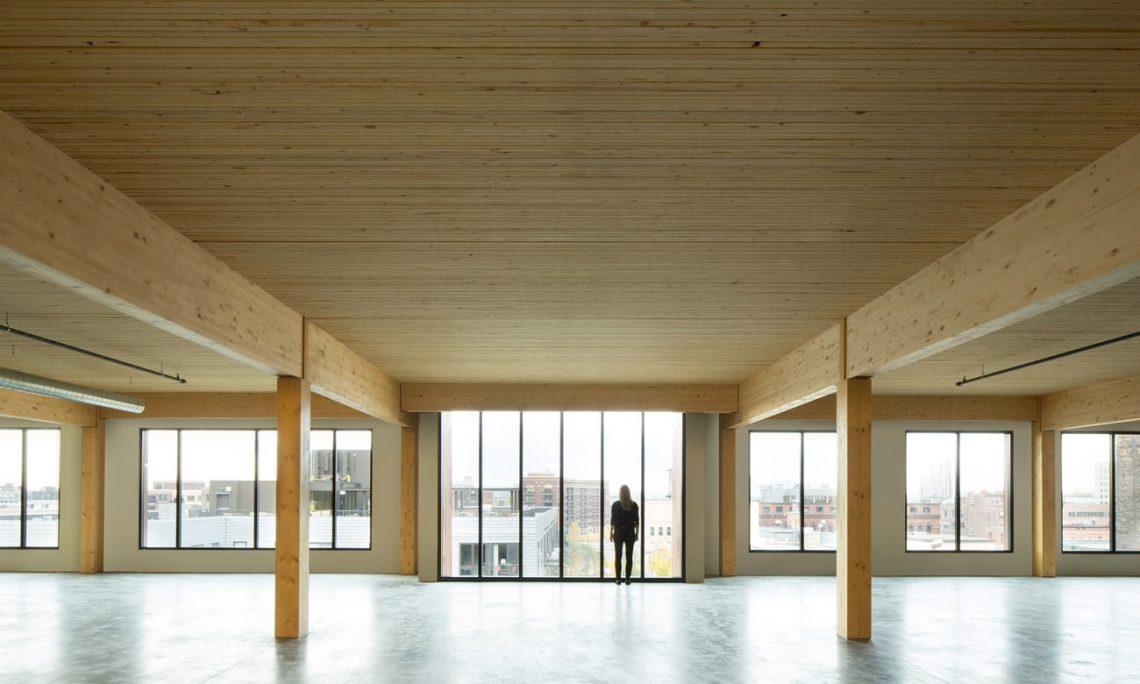 Strong, clean and versatile, engineered timber is the ‘new concrete’. With wooden skyscrapers in the offing, could it be the answer to the global housing crisis?

There is a miracle building material – one so environmentally friendly that it extracts carbon from the atmosphere rather than adding to it; a stuff with which structures can go up at lightning speeds, that reduces the noise and disruption of building sites, that can be as strong as steel and much lighter, that makes both construction workers and a building’s users happier, and that, with the help of technology, is getting ever more efficient and adaptable. “It’s the material of the future,” an architect tells me. Its most ardent proselytisers think it could fix the overcrowding of the world’s cities. At the same time, this stuff – wood – is so ancient that 18th-century theorists believed that Adam built the first house out of it in the Garden of Eden. Mild-mannered, unassuming timber has gone into a phone box and come out as a super-substance.

Its glamour has unglamorous origins. They go back some time. In the 1990s, because digital technology was already causing the world to use less paper than expected, the Austrian government funded a search for alternative uses for the timber grown in its forests. Gerhard Schickhofer, a professor of engineering, came up with an idea, which was to build up layers of planks, each one at right angles to its neighbours, bond them with glue and press them. This makes a sort of ultra-plywood, called cross-laminated timber (CLT). It’s strong, rigid and durable, insulates both heat and sound, and can be prefabricated in factories to high levels of quality and precision. You can make floors, walls, stairs and lift shafts out of it, stacking up panels like an unusually stable tower of dominos.

dRMM’s 2009 proposal for a wooden arena (unbuilt) for the London Olympics. Photograph: dRMM

Although CLT gets the most attention, it is one of several products that go under the name of “engineered timber”, which have in common the use of new technology to make a natural material perform like an industrial one. One British early adopter, Alex de Rijke of dRMM architects, who won the 2017 Stirling prize with the company’s part-CLT rebuilding of Hastings Pier, called engineered timber the “new concrete”. He means that it’s a material where the surface you see is also the stuff that holds a building up, which is the stuff that keeps out the weather too. “There can be something very visceral about that,” De Rijke says. “We all like stone cathedrals for that reason.”

Another enthusiast, Andrew Waugh of Waugh Thistleton, points out the ways in which it is better than concrete. You can put up the structure of a nine-storey block, as he did in Murray Grove, north London, with a team of four carpenters in 27 working days. Engineered timber makes for quieter, calmer, cleaner building sites, without the noise and dust of hammer drills and grinders. It requires a fifth of the deliveries by truck that concrete does. It creates minimal waste (which, as a high percentage of the rubbish that goes to landfill comes from construction, is no small matter).

Whereas a tonne of cement emits nearly a tonne of carbon in its making, a tonne of timber will, through the trees from which it is made, remove up to two tonnes of carbon from the atmosphere. “If you had to invent a machine,” says Waugh, “which gives you a renewable supply of building materials while also reducing carbon levels, it would be a tree.” Of course, to achieve these gains, building timber has to come from trees that are replaced, but here too it can be beneficent. It can create a demand that encourages the growing of new woodland and care of the existing. Waugh says he has met foresters in the American north-west who are thrilled by the renaissance of timber construction, as it could revive their woods.

The environmental benefits aside, the practical arguments are still strong – both Waugh and De Rijke have hard-headed commercial clients who use engineered timber because its speed of construction saves them money. For all these compelling reasons, the world is expected to use a million cubic metres of CLT this year, compared with 2,000 cubic metres in 2003. Its existence is hardly news in the architectural world, but it is now at the point where it’s going mainstream.

There will also be wooden skyscrapers, which are the subject of Timber Rising, a forthcoming exhibition at the Roca London Gallery. Michael Green, an architect based in Vancouver, has proposed a 35-storey tower, called Baobab, that would straddle the Périphérique in Paris. With the engineer Eric Karsh, he has worked out that it would now be possible, if not very sensible, to build the Empire State Building out of wood. Green has given a TED talk proclaiming that, as billions of people are moving from countryside to cities, wooden towers could provide the homes they need. Timber, he says, is “the most technologically advanced” form of construction, offering “the first new way to build a skyscraper in 100 years”, but one to which “mother nature holds the patent”.

As TED talks often are, Green’s is a little preacherly and simplistic, but he can back his enthusiasm with substantial commercial buildings – there is one called T3 in Minneapolis, for example – made out of wood.

He is “having conversations”, he says, about 30 more. The main obstacle, he believes, to the conquest of the building world by engineered timber is “education”. There are not enough professionals who understand it, and those who do are too busy to explain it to others. Building regulations in many cities are still wary of it. Timber, he says, needs “its Eiffel Tower moment” that will make everyone realise its possibilities.

Others are sceptical about the preoccupation with height. De Rijke believes there’s a limit to how high a timber structure can sensibly go, and that there are other architectural problems to solve in building tall. And he thinks that, in all the preoccupation with the technical wonders of timber, it’s possible to lose sight of the fact that “it is a much better material to live with than any other”. It has, he says, “built-in texture, a sense of scale, grain, scent. It affects the air quality about it. You could shut your eyes and still notice the difference.”

Everyone I talk to about timber tells me that, although more research on the subject is needed, wooden buildings make people feel better. They reduce stress, lower heart rates, calm children in classrooms, improve recovery in hospitals – all of which seems intuitively likely. Healthy atmospherics could, of course, be engendered by all kinds of timber, old-fashioned or engineered, but the attraction of the latter would be that it could achieve such qualities in large and efficient new structures.

The only thing is, there are not yet that many buildings made of CLT, or one of its cousins, that fully realise the transformative powers with which it is credited. Quite a lot look much like steel or concrete buildings that happen to be made of wood. They tend to be a bit boxy. Often the timber gets covered with other materials. If engineered timber is truly the material of the future, its architectural possibilities are only just beginning to be discovered.

When you’re told that something is wondrous and world-changing, a touch of scepticism is a natural reaction, and the revolution promised by the believers in timber may yet not happen. But the case for it looks compelling – at the very least, it is a good way to build to go with several others. Lastly, in case you are worried, engineered timber buildings don’t burn easily. At high temperatures concrete explodes and steel buckles, but wood, if it is thick enough, chars, which forms a self-protective layer. It takes a while for fire to consume it.