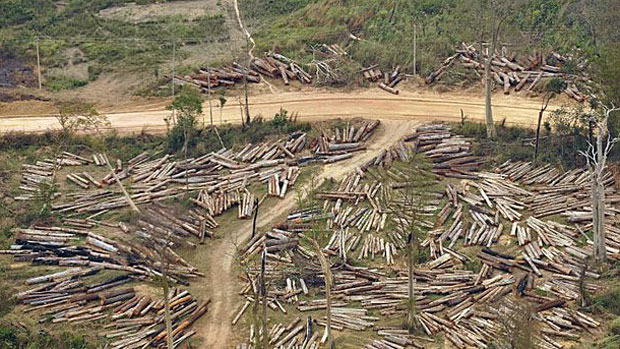 Deforestation from unchecked logging in Laos is shown in a file photo.

Customs officers in central Laos’s Bolikhamxay province stopped a truck carrying contraband rosewood at the border with Vietnam at the end of December, as smugglers continue to frustrate government attempts to halt the illegal trade in timber, sources said.

Authorities confiscated the load of hundreds of logs and arrested the truck’s driver, an official of the provincial Natural Resources and Forestry Department told RFA’s Lao Service.

“On Dec. 23, we seized 849 rosewood logs weighing over 30 tons that were buried under boxes of Red Bull drinks,” the Lao official said, speaking on condition of anonymity.

The truck’s driver, a Vietnamese, was arrested at the scene, the official said, adding that police had received advance word that the logs would be smuggled into Vietnam through the border gate at Nam Phao and that the driver had no papers proving the wood was legally his.

Police are now looking into the case carefully for evidence of involvement by a larger transboundary timber smuggling gang, the official said.

In May 2016, Lao Prime Minister Thongloun Sisoulith announced a ban on timber exports as part of an effort to end rampant smuggling to China and Vietnam, where the wood is used to make high-end furniture.

However, authorities in southern Laos’ Attapeu province continue to turn up caches of illegally logged timber, despite a pledge by the governor to eradicate the trade when he took over administration of the region in November from his predecessor, who was removed because of ties to timber smuggling.

On Dec. 13, 2017, a provincial inspection team discovered 250 pieces of illegal timber, measuring around 180 cubic meters (6,350 cubic feet), buried underground in a forest area of Attapeu between posts 766 and 770 of the Lao border with Vietnam.

According to a senior provincial official, who spoke to RFA’s Lao Service in a report at the time, the cache “must belong to Lao and Vietnamese businessmen who colluded in this illegal activity.”

“We found it before they were able to deliver it,” he added.

Also in December, a provincial inspection team stopped a Toyota SUV driving through Saysetha district towards the border with Vietnam and uncovered 11 pieces of hidden rosewood timber valued at around U.S. $20,000, according to reports by local media, which said the driver was the former deputy head of the Immigration Police Division at the Phoukeua International Checkpoint in Attapeu.

In May 2017, Lao authorities seized a convoy of 27 trucks of logs owned by Seng Viyaketh, wife of Attapeu’s then-governor Nam Viyaketh, at the Phoukeua checkpoint. Authorities determined that the timber was illegally obtained in Laos, where logging is heavily restricted as a measure to curb widespread deforestation.

Three Lao officials from Attapeu’s finance, forestry, and commerce departments are being investigated for their roles in the scheme and have since been ordered to stop working.

The Politburo issued an order early in November reassigning Nam to work with the country’s National Social and Scientific Council and replacing him with Leth as part of a “reshuffle of high-ranking leaders … in accordance with job requirements for the new era.”

While Nam and his wife denied any connection to the trucks seized in May, an official source who inspects timber in the southern provinces of Laos told RFA that the governor’s dismissal was directly related to the incident, as well as “conflict of interest for his family” and embezzlement.

Most timber illegally harvested in Laos is obtained through conversion forestry—clearing areas marked for the development of infrastructure projects such as hydropower dams, road building, and mining operations—which is used as an excuse for large-scale logging that otherwise would not be permitted under Lao law.