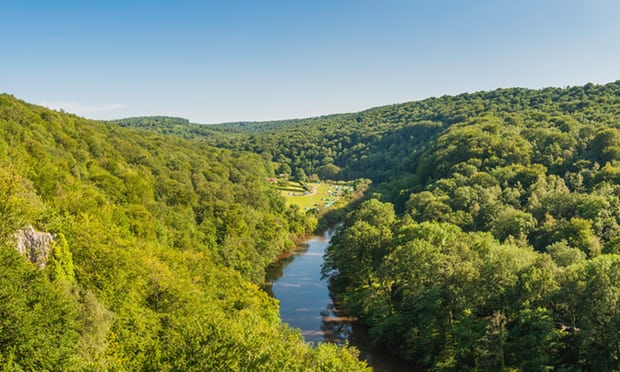 The government has pledged £5.7m to kickstart the creation of a northern forest that will stretch from Liverpool to Hull.

The project aims to provide new habitat for wildlife, as well as bolstering the local economy by an estimated £2bn through tourism, jobs, increasing property value and reduced flood risk to 190,000 homes. The Woodland Trust claims the new woodland will help tackle climate change by locking up an estimated 8m tonnes of carbon.

The UK is one of the least forested countries in Europe, with just 10% of England covered by woodland, compared with 31% of France and 37% of Spain. Just 7.6% of the area planned for the northern forest is currently covered by trees.

The government has set a goal of 12% woodland coverage in order to help meet its targets to cut climate emissions, but the Woodland Trust claims that in 2016 there were just 700 hectares of planting in England, well below the national target of 5,000 hectares (12,500 acres) a year.

Planting for the forest is to begin in March at the Woodland Trust’s 680-hectare flagship site in the suburb of Smithills, in Bolton. The charity will deliver the project in partnership with five community forests that sit within the proposed area for the new woodland – the Mersey forest, Manchester’s City of Trees, Leeds’ White Rose forest, South Yorkshire community forest and the Heywoods project.

The plans resemble those that created the National Forest in the Midlands, 200 sq miles of new woodland planted in north Leicestershire, south Derbyshire and south-east Staffordshire. That project was launched in 1991, in part to regenerate the area after the decline of the mining industry.

Announcing funding for the northern forest project, which forms part of the government’s 25-year environment plan, Theresa May said: “It is vital that we leave our planet in a better state than we found it, with cleaner air, stronger protections for animal welfare and greener spaces for everyone to enjoy.

“Progress is being made. We’re investing over £3bn in improving air quality, tackling marine pollution by banning harmful microbeads and increasing sentences for animal cruelty to five years.

“But to create an environment fit for the future we can’t stop there, and that is why we are supporting the creation of this new northern forest and will shortly be setting out our ambitious vision to further support the environment and protect its good health for generations to come.”

Austin Brady, the director of conservation at the Woodland Trust, said planting more forests would “lock up carbon on a large scale, boosting wildlife habitat and greening our towns and cities”.

Responding to the government’s £5.7m commitment, he told the BBC: “We’re delighted the prime minister’s supporting our project. It’s great to get the idea of the northern forest on the map. Admittedly the government’s cash contribution isn’t huge, but it will help us to unlock other funding.”

Michael Gove, the environment secretary, described trees as “some of our most cherished natural assets and living evidence of our investment for future generations”.

He said: “Not only are they a source of beauty and wonder but a way to manage flood risk, protect precious species and create healthier places for us to work and live.”

Paul de Zylva, a senior nature campaigner for Friends of the Earth, said the government announcement was extremely welcome, but added: “It’s a supreme irony that the current routing of HS2 [rail line] threatens 35 ancient woodlands north of Birmingham. We need new forests and ancient woodlands – not one or the other.

“Communities across England also face threats to their local parks and green spaces through developments and council cuts. Ministers must do far more to rescue the UK’s declining nature, and give every child a right to experience it every day.”  The Guardian