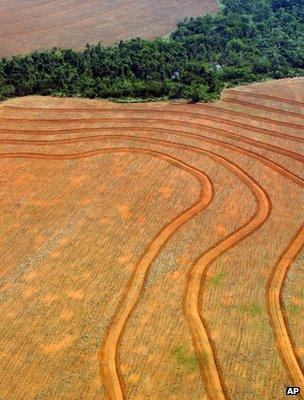 Measures to prevent illegally harvested timber from entering the European Union come into force on Sunday.

The EU Timber Regulation (EUTR)requires importers or sellers of timber and wood products to keep records of the sources of their supplies.

Interpol estimates that illegal logging contributes up to 30% of timber in the global market, costing in excess of 15bn euros ($20bn/£13bn) each year.

The EU accounts for 35% of the world’s primary timber consumption.

The law, which was adopted by the European Parliament and Council back in October 2010, is only just coming into force because of the measures member states and private companies had to put in place.

Operators, which refers to “those who first place a timber product on the EU market” – through a “due diligence” system – are required to “make every effort to ensure that the wood they trade in is legal”.

The due diligence system (DDS) comprises three elements, including access to information relating to shipments’ country of origin, quantity and suppliers’ details; evaluation that the timber was produced in compliance with the laws of the country of origin; taking additional steps to ensure the legality of the timber if there is any doubt over its provenance.

In addition, the EUTR requires traders (“those who sell or buy the timber already on the EU market”) to keep “adequate information so that the wood they deal in can be easily traced”.

Regulations, such as the EUTR, are having a big impact on timber-producing nations as they strive to protect their legal industriesJacek Siwek, Asia Pulp and Paper

Officials say the new law covers a wide range of products, from paper and pulp to solid wood and flooring, and forms a part of ongoing efforts to help tackle the global problem of illegal logging.

Illegal logging is defined as the harvesting of wood that breaches the laws or regulations of the country of origin.

The European Union says it has “severe economic, environmental and social impacts for some of the world’s most valuable remaining forests and the billions of people that rely on them.”

In 2012, Interpol and the UN launched Project Leaf, an initiative to combat illegal logging and organised forest crime.

In February, Interpol said almost 200 people had been arrested in a wide-ranging international anti-illegal logging operation.

The global anti-crime agency added that the three-month effort spanned 12 Central and South American countries, and $8m (£5.2m) worth of timber had been seized.

Environmental group WWF says much of the illegally traded timber comes from central Africa and South-East Asia, with a “significant proportion” being processed in China and Hong Hong before being shipped to EU nations, particularly the UK.

Image captionThe annual total value of illegal logging could be as high as $100bn, experts estimate

“This is a landmark piece of legislation, which for the first time gives us a real chance to tackle the negative impact that our indiscriminate trade in timber and wood products has had on forests globally,” said Beatrix Richards, WWF-UK’s forest campaigner.

But WWF added that the legislation did not cover forest management systems.

“Even though a wood product may be legal, it does not mean that it has been produced without destroying valuable forest ecosystems,” it noted.

“Implementing green public procurement policy to ensure the purchase of sustainable timber and products in public supply contracts across the member states will remain essential.”

Senior campaigner at Global Witness Alexandra Pardal said the new measures meant that timber importers would “have to up their game”.

“For decades, consumer countries have been driving the demand for cheap, illegal timber that breeds corruption and criminality in forested countries while taking a devastating toll on the environment,” she told BBC News.

“Almost all timber from tropical rainforests carries a high risk of such illegality and should be checked out thoroughly – if there’s any suspicion at all, don’t touch it.”

On Monday, Global Witness is set to publish a report that highlights the extent of the challenges of halting the arrival of illegal timber in the EU.

Asia Pulp & Paper (APP), described as one of the world’s leading pulp and paper companies, announced in February that it was ending the clearing of natural forests across its supply chain in Indonesia, where the company is based.

Jacek Siwek, APP director of sustainability and stakeholder engagement in Europe, said the EU was “demonstrating its collective muscle by closing one of the world’s largest markets to illegal timber”.

Writing in a guest blog on the FT.com website, he added: “Regulations, such as the EUTR, are having a big impact on timber-producing nations as they strive to protect their legal industries while eliminating or at least reducing illegal logging.

“Indonesia is playing its part by matching the demand-side measures from the EU with coherent supply-side measures such as the new SVLK legality system.

“SVLK is designed to ensure that all timber products legally exported from Indonesia can be traced from origin through transport, trade and processing.”

The measures introduced by the EUTR form part of the Bloc’s Forest Law Enforcement, Governance and Trade (FLEGT) action plan, which was published in 2003.