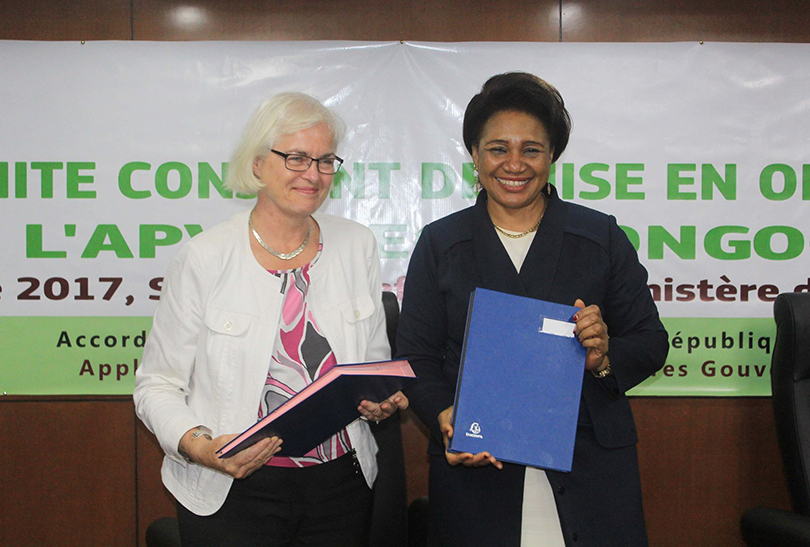 The Republic of Congo and the European Union (EU) have adopted a five-year plan for the implementation of their Voluntary Partnership Agreement (VPA) aimed at eliminating illegal logging. This Agreement is part of the EU initiative on Forest Law Enforcement, Governance and Trade (FLEGT).

The new five-year action plan for the implementation of VPA 2018-2022, as well as an Annual Work Plan for the year 2018, were adopted by Congo and the EU at the meeting of the Joint Implementation Committee (JIC) of the VPA, which met in Brazzaville on 5 December 2017.

This seventh meeting of the JIC took stock of progress made since its last meeting held in May 2017. The JIC welcomed the growing number of implemented recommendations and activities of the 2017 Annual Work Plan since its previous meeting. This new dynamic in the implementation of the VPA in Congo was also recognised in a stock taking exercise that took place in October 2017.

In addition to the strategic tools for the FLEGT VPA 2018-2022 implementation, both parties addressed issues related to the national installation and deployment of the Computerised legality verification system (SIVL in French), which was recently installed in the Ministry of Finance and Budget. Congo is the first country in the Congo Basin to equip itself, with the support of the EU, of software for managing data related to the traceability and legality of timber products.

Congo and the EU also adopted several recommendations related to the SIVL, including the formalisation and establishment of an Inter-ministerial Committee for the mobilisation of funds and the monitoring of the national deployment of the SIVL, the creation of a Coordination unit for the deployment of the SIVL within the Ministry of Forest Economy, and the integration of the guidelines on treatment of non-compliance and penalties in the SIVL.

The JIC also discussed the draft forest law and its implementing regulations. The Ministry committed to share with the EU the draft implementing texts of the draft law before they are submitted for validation by all stakeholders at a national workshop that will take place during the first quarter of 2018.

Participants also discussed the functioning of VPA bodies and structures, as well as capacity building and collaboration among stakeholders. They attended a presentation on the first European market results of FLEGT licences from Indonesia.

The JIC is made up of representatives of ten Congolese ministries, the EU, civil society and the private sector. It is an opportunity for an inclusive and transparent dialogue among all stakeholders, in line with the approach adopted by the Congolese Government and the EU under the VPA.

Following the discussions between the technical experts during the morning, the recommendations formulated were validated and formally adopted during the formal afternoon session, co-chaired by Mrs Rosalie MATONDO, Minister of Forest Economy and by Saskia de LANG, Ambassador and Head of the EU Delegation to the Republic of Congo.

Mrs Rosalie MATONDO recalled that ‘the VPA with the EU includes the vision of improving forest governance and increasing the GDP contribution of the forest sector through the production of legal timber.’