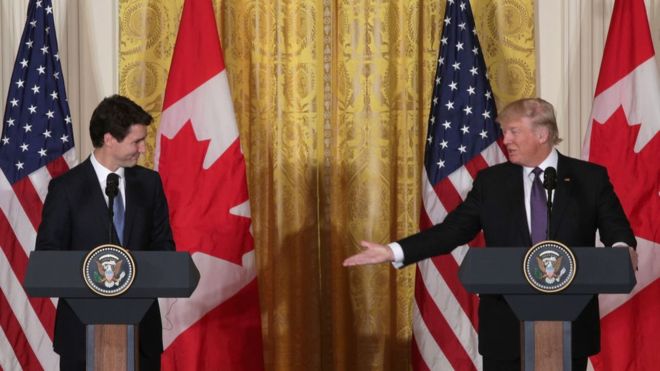 Canada has filed an expansive complaint with the World Trade Organization accusing the US of breaking international trade rules.

The complaint challenges the ways that the US investigates products for subsidies and below-cost sales.

The US called the claims “unfounded”.

The action comes amid disputes between the two countries over areas such as dairy, aircraft sales and lumber as well as efforts to renegotiate the North American Free Trade Agreement.

Canada’s 32-page complaint cites US investigations of products from countries around the world, with decisions that date back to 1996.

Among other charges, Canada says the US improperly calculates rates and restricts parties from presenting evidence to defend themselves, with a cut-off for supplying information that comes too early in the process.

It also accuses the US International Trade Commission of being biased since disputes over which the body’s six commissioners are evenly divided automatically result in a finding for the US.

Eric Miller, president of the Rideau Potomac Strategy Group, which consults on North American trade issues, said the scope of the filing is “unprecedented”.

“It is global, it is over many years, it is systematic and so this is something that certainly, in the realm of WTO cases, is outside the norm in terms of its reach and its ambition,” he said.

Canada’s complaint targets a process that the US has deployed frequently under President Donald Trump, who has embraced a protectionist stance on trade.

The US Commerce Department launched more than 80 anti-dumping and countervailing duty investigations last year – a 46% increase from 2016.

The investigations, which are typically triggered by complaints from private companies, can lead to steep tariffs.

This week, the Commerce Department announced results in additional investigations – including one against Canadian newsprint producers.

US Trade Representative Robert Lighthizer, the top US negotiator in the talks, called Canada’s WTO filing “a broad and ill-advised attack on the US trade remedies system”.

He said: “Canada’s claims are unfounded and could only lower US confidence that Canada is committed to mutually beneficial trade.”

The petition, filed with the WTO on 20 December and shared with members on Wednesday, kicks off 60 days of “consultation”.

If it is not resolved in that time, it is subject to adjudication by a WTO panel.

US Commerce Department Secretary Wilbur Ross said the US has “every confidence” it will win in adjudication.

“These cases were conducted in an open and transparent manner in accordance with the applicable laws, regulations, and administrative practices to ensure a full and fair review of the facts,” he said.

In November, it filed a complaint with the WTO contesting US duties on Canadian softwood lumber producers.

“We continue to engage our American counterparts to encourage them to come to a durable negotiated agreement on softwood lumber,” Chrystia Freeland, Canada’s minister of foreign affairs, said.

Mr Miller said Canada may hope the filing will apply pressure on the US in its disputes, while allowing the country to make a broader statement about the importance of international organisations and rules.

He added that it is a sign that the negotiations over NAFTA are not going well.

President Trump has threatened to pull the US from the agreement, while Canada is trying to galvanise support for the existing deal.

A part of the agreement that creates a process for NAFTA partners to appeal tariff decisions is one of the thorniest issues in the talks.

“Certainly if the parties felt that they were on a trajectory to get a NAFTA deal and were close to a deal, doing something like this would be unhelpful, to put it mildly,” Mr Miller said.