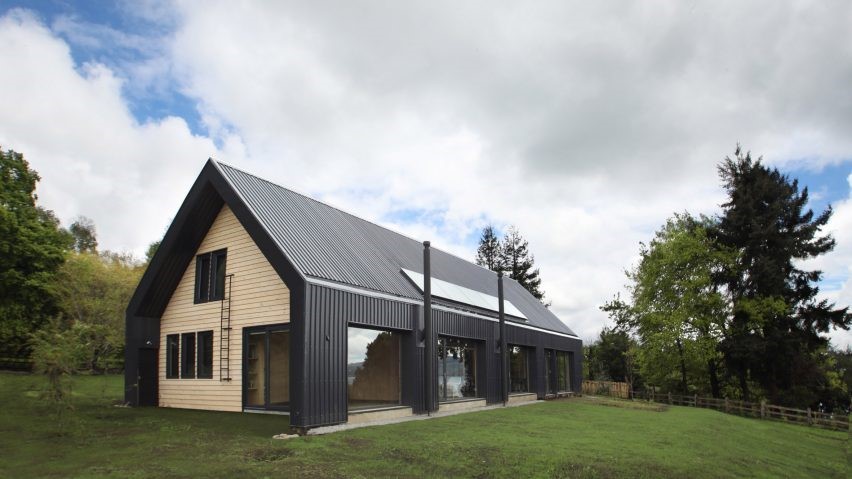 Chilean studio Apio Arquitectos has used wooden barns as a reference for this nature retreat, with pitched roofs and facades wrapped in grey metal and pine.

The House in Lake Calafquen is located in southern Chile‘s Los Ríos Region. Dotted with lakes, the rural area features low ridges, where “elements appear like isolated modules in a continuous ground”. The dwelling serves as a year-round family retreat.

While conceiving the home, the design team looked to the region’s vernacular architecture.

“We cite as an inspiration one old local typology: the wood country barn that is part of the south of Chile scenic identity,” said Apio Arquitectos, a studio based in Santiago. “A simple and neutral module that doesn’t modify the landscape.”

The 480-square-metre dwelling consists of two adjoined volumes – one small, one large – with gabled roofs. The team used standing-seam grey metal for the roofs and long sides of the home, while the other facades are clad in pine boards.

“For issues of maintenance and efficiency, the metal cover was chosen, which contrasts with the laminated pine beams and the interior panelling,” the studio said.

Inside, pine was used for exposed beams, columns, flooring and walls. Window and door frames rendered in black contrast with the light-toned wood.

A row of square skylights ushers in natural light, while floor-to-ceiling glass offers plentiful views of the scenic landscape, including an active volcano.

“A solemn interior space, achieved through the exclusive use of wood construction system, is related to its environment through directed views to the Villarrica Volcano and its surroundings,” the team said.

Rooms are fitted with a sparing amount of furniture and decor, including black dining chairs and a white sofa.

Other dwellings in Chile include a faceted house by Verónica Arcos that sits in a forest clearing and a surfers’ retreat by Studio Selva that is wrapped in eucalyptus screens.

Photography is by Marcela Melej.